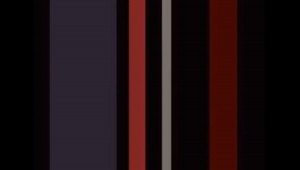 As activity happens on the TV screen it is analysed for the percentage of colour that exists – relative to the whole screen area. This is broken down into coloured stripes of varying width. The material is edited to remove any dialogue.

Following a conversation with a computer programmer about his latest job, which was to produce ‘colour spectrometer software’ that would identify subtle differences in the flower-heads of Chrysanthemums, I became curious as to how this software might be adapted for an artwork. At the time I was sampling colour from television programmes, including the first series of Star Trek, to create unique colour palettes…so I asked the computer programmer if he could develop a piece of software that could analyse the percentage of colour that appears on screen (in each frame) and to create strips of colour, relative to the overall size of the screen area, from that data. This video was the first outcome of that idea. It was first shown in a solo exhibition titled Colour Memory in 2005.

In 2013 I revisited this series of works and focused on the sound aspect. I decided to create a new soundtrack to accompany the ‘breakdown’ footage by editing out all the dialogue and retaining only the musical soundtrack along with any other sounds between the dialogues. This is one of four short sequences, based on one Star Trek episode titled The Changeling, using that process.