Zones - An audiology of the River Clyde (Documentation from audio boat trips) from Stephen Hurrel on Vimeo. 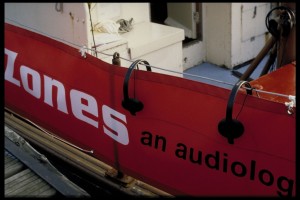 (Note: this documentation features 5mins sampled from a 20mins soundtrack along with still photos)

I was commissioned by the Tramway in Glasgow as part of their Tramway@ series of site-based commissions in 1999.
I wanted to respond to the River Clyde in Glasgow and decided to hire a passenger boat for a weekend, kit it out with headphones and create a soundtrack for a journey along the post-industrial / pre-redeveloped River Clyde.

I made field recordings from the environment, sampled audio from the Scottish Television Archives and then worked with Glasgow-based musician 21st Century Troy to create a twenty-minute soundtrack consisting of five distinct ‘zones’ that would map onto the actual environment. Troy produced an ambient soundtrack that somehow managed to fuse all the recordings together as well as create the right mood for each zone.

The audio-boat-trips took place in November 1999, the end of the twentieth century / beginning of the twenty-first century. There were ten trips with approximately 25 people on each boat. It seemed a good time to reflect on the history of the Clyde, and to use sound to recall the ghosts of its past and to contemplate the future. The journey began near the centre of Glasgow and took us past several wasteland sites, a few remaining shipyards, a sewage plant, a metal scrapyard, empty buildings ready for demolition, and ended at the recently opened Braehead Shopping Centre.