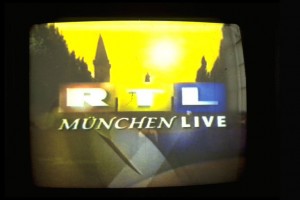 Unannounced television interventions took place three times during a 30mins live broadcast of the programme Munchen Live on RTL, Germany (18:00-18:30, 26th Oct. 1994). Each time the interruptions took place the Presenter reacted to them.

Through the dialogue, the breakdown of the relationship was placed within the wider context of world events, and the failure of certain political systems, that were regularly featured in the media at that time.

This piece was part of a Glasgow-Munich exchange project titled No Way Back that also featured public media interventions by Peter McCaughey and Fiona Wright (who are also the protagonists in Videophone Dialogues_TV Interventions). See the text at the end of the video documentation, on the right here, for further information about No Way Back.