Beneath and Beyond: Seismic Sounds (2008_ongoing)

The sound of the earth, live 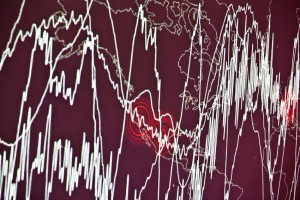 Beneath and Beyond  is a data-driven sound and video artwork that enables us to experience the constant movements and tectonic shifts beneath the Earth’s surface in real-time.

Beneath and Beyond has been experienced as an immersive sound and video installations at galleries and art festivals in Europe, America and Australia since it premiered at Tramway, Glasgow, Scotland in 2008, as part of Glasgow International Festival of Visual Art.

Initial development work took around two years (2006-2008) and was supported by a major SAC Creative Scotland Award. Since then the project has continued to develop, and to adapt to new technical possibilities and exhibition formats. So far it has been shown in Scotland, England, Slovenia, Italy, Australia, Tasmania and San Francisco. It will soon be available to listen to live via a new App.

“… a hotline to the centre of the earth, where subterranean demons are perennially slugging it out”