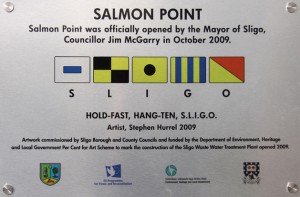 Hold Fast Hang Ten is a permanent sculptural installation designed for a public amenity space called Salmon Point, beside the harbour in Sligo, on the west coast of Ireland.

Each of the five wood and steel constructions are based on nautical signal flag designs. Each signal flag represents a message as well as a letter of the alphabet.  The ‘hidden message’ in the five constructed pieces spells out S.L.I.G.O. which is indicated on the stainless steel plaque at the entrance to the site.

Four large pieces of Kilkenny Limestone (two pairs) each have a single word craved into their top surface; HOLD FAST and HANG TEN. The idea of having the text deep carved on the top surface is so that each letter may, at times, fill up with rainwater.   This also makes reference to the water that used to exist on this former swimming pool site.

The text ‘HOLD FAST’ refers to tattoos that Riggers, who once worked in the port, used to have on their hands to ‘help them pull in the ropes’.

The text ‘HANG TEN’ refers to a surfing term, ten toes hanging over front of the surf-board. This reference is recognition of the exchange between Ireland and America. Surfing has become a popular ‘imported’ sport.  However Ireland is well connected to the history of surfing also as it was George Freeth, son of an Irish family who immigrated to Hawaii, who learned how to surf from the locals and then introduced it to California… it then travelled back to Ireland.

Additionally the artist has also designed ripples in the grass – in the area where the swimming pool used to occupy. The ripples emanate from the point where people would dive from the diving board.

Commissioned by Sligo Local Authorities and funded by the Department of Environment, Heritage and Local Government Per Cent for Art Scheme.  It was officially Opened in October 2009. The commission marks the delivery of the Sligo Waste Water Treatment Plant officially opened in May 2009.